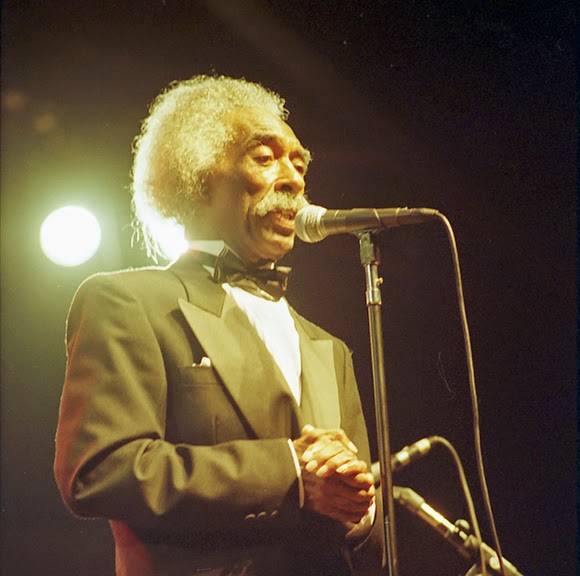 Bandleader Gerald Wilson used to tell his UCLA class that if he wasn't mentioned in a jazz history book, the book wasn't worth buying. As absurd and supercilious as that statement sounds, he was absolutely right. Wilson passed away earlier this month at the age of 96. He left an unparalleled legacy that stretched back to the 1930s and will likely never be rivaled in terms of influence, endurance, and sheer entertainment.Wilson's class wasn't just for jazz majors. The attendance typically topped off at 400 and included musicians, football players, chemistry majors and everybody in between. He taught at UCLA for more than fifteen years, regaling thousands of impressionable minds with his first-hand experiences with music legends like Billie Holiday and Dizzy Gillespie before retiring at the age of 90.Saxophonist and Cal State Fullerton professor Dr. Charles Sharp worked as his teacher's assistant for several years. "Gerald was not teaching those classes for jazz majors. He didn't want to do a seminar for experts," said Sharp. "He wanted everybody together. He enjoyed being an expert and being kind of a spokesperson, a representative of jazz to the broadest possible audience and I think a lot of his music is that way too. His music is incredibly advanced but can also be pop-oriented at the same time."
Wilson got his start as a trumpeter with the Jimmie Lunceford band in 1939. He honed his writing and arranging skills with the group, contributing infectious hits like "Yard Dog Mazurka" to the band's swinging book before setting off on his own. Though born in Shelby, Missisisippi, Wilson settled in Los Angeles in the mid 1940s and became a fixture on the Central Avenue scene.His arrangements were unique, delving into dense, eight-part harmony that moved like the grasping mitts of a striding pianist, no fingers repeating the same note. He wrote more than a dozen arrangements for Duke Ellington and five times that for Ray Charles including a handful of riotous charts for Charles' landmark 1962 album "Modern Sounds in Country and Western Music."
The 1960s were also a successful period for Wilson's solo career. He recorded several albums for the Los Angeles-based Pacific Jazz label and they are master classes in swagger and sophistication, samba and soul. His hit "Viva Tirado" became a frequent high point of his live performances through to last summer. The band El Chicano scored with their version of the tune in 1970 which helped to redefine and boost Wilson's cross-genre appeal.
Wilson's old school desire to entertain never left his side. Mid-tune he would approach the microphone and just scream with his fists raised and his abundant white hair protruding from under his baseball cap. At his best, he had the unhinged passions of an ecstatic wildman, a trait that is so rare but always hoped for from jazz stages.


Aside from the thousands of students he educated, he also employed hundreds of others in his big band over the years. Tenor saxophonist Kamasi Washington had the honor of being both a student and employee. At the age of 19, he joined Wilson's orchestra and immediately found his place as a featured soloist."As fiery and intense as he was, he was such a nice person," said Washington. "He always looked out for his band. I've played with so many other people since and they're looking out for themselves. Gerald would always make sure everyone else was cool and that's hard to do with a big band. He cared for people on a deep level."Three years ago, Wilson was nominated for a Best Large Jazz Ensemble Grammy for his last studio album, "Legacy" (It was his seventh album since turning 80). He kept his big band active with regular appearances around Los Angeles including a spot headlining the Central Avenue Jazz Festival each summer. Last July, in the shadow of the Dunbar Hotel, Wilson led his band through one more romping "Viva Tirado" that was as full of energy as when it was first recorded in the early 60s. The next Central Avenue Jazz Festival will be the twentieth annual. It just won't be the same without him.
Gerald Wilson @ KCET
Hastily posted by Cult of SOC at 11:30 PM