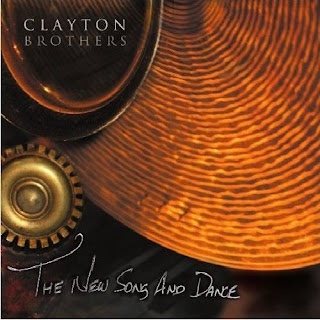 The Clayton Brothers - The New Song and Dance

Los Angeles-based brothers John and Jeff Clayton
formed the powerhouse Clayton-Hamilton Jazz
Orchestra in 1985 - only a year after the birth of John’s
son, Gerald – while also maintaining sturdy reputations
in the academic scene and both of their careers are still
thriving. This quintet album continues the family
tradition with all three Claytons contributing wellcrafted
tunes and tasteful, hard-swinging solos.

Despite its title, opening track “Cha Cha
Charleston” is about as far from James P. Johnson as
one can get. Soft-focus cymbals offer an ethereal mood
before John Clayton kicks in with a driving bassline
that underscores the bright horn lines from Jeff Clayton
on alto and Terell Stafford on trumpet. Drummer Obed
Calvaire closes the tune with a precise yet opposing
solo over a herky-jerky horn line. “Battle Circle”,
pianist Gerald Clayton’s contribution to the album, is
anchored by John’s Morse code-like thump. Stafford
takes a measured but passionate approach over the
busy rhythm section while Gerald’s solo, which starts
out on the actual strings of the piano, is equally
controlled amid the turbulence. “Smarty Pants Dance”
is a quick-fire tune whose melody veers seamlessly
through starts and stops. Gerald takes off first with
each briskly articulated note flying by while Stafford
playfully jumps through the changes.

The sole cover of the set, Stevie Wonder’s “They
Won’t Go When I Go”, starts with John’s aching bowed
melody backed by Stafford and Jeff on flute, turning
Wonder’s song into a chamber piece only lightly
accented by a pair of brushes; except for a brief bout of
swing, the band keeps it cool throughout. The group
closes with the second-line-infused “Street Dance”,
Gerald’s bouncy block chords and Calvaire’s
propulsive drumming anchoring the tune. The band
finishes in style, strutting hard with a little cowbell
thrown in for good measure.

The theme of the artwork and titles is all about
dancing but few moments on the recording actually
summon the desire to cut a rug. Instead the quintet has
created an album that highlights the composing talents
of two generations of Claytons, further solidifying
John and Jeff’s status while also showcasing Gerald as
the recipient of all those enviably hard-swinging genes.