Drink of the Week - The District 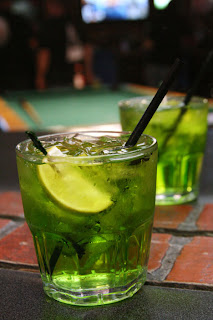 Among Orange County’s little cottonwoods lies a windowless rumpus room known as the Sportsman. From the looks of the clientele, these sports seem to consist mostly of darts and Big Buck Hunter. From the looks of the barmaids, these sports also include a little snowboarding and underwear shopping. Los Alamitos does not do much to promote the fact that it houses a bikini bar, but there they were: pleasant, young women, walking around on designer stilts and wearing less than a napkin’s-worth of fabric. When we arrived at the Sportsman between droplets of rain, the patrons—which included but one woman—were more focused on the Lakers game than on the scantily-clad staff standing between them and the TV set. Although the hard liquor was low-priced and high-quality, the majority of drinks consumed on this night were bottled beers. (It’s not very healthy to be dipping in and out of an ice-lined fridge all day without the assistance of a little goose down, but hey, these women are professionals.) Aside from bending at the waist and cracking open frosty MGDs, the ladies also flexed their skills with a few house specialties—fruity concoctions of indeterminate alcohol content that make everything from the eyes to the toes twitch. Having already surrendered my masculinity by inquiring about the specials in the first place, I settled on the Juicy Pear. Now, pears can make a fine brandy, but in the hands of these nubile mixologists they are downright dangerous. Sugary and sweet, the drink tastes like a can of pears rinsed with vodka and strained with a little ice. Consume three or four of them, and who knows what could happen? As to who exactly orders these cloudy libations, tonight it was just me—and I was there strictly for research. Journalism can be such strenuous work.

Drink of the Week @ the District
Hastily posted by Cult of SOC at 9:10 PM 1 comment:

No Words - The District 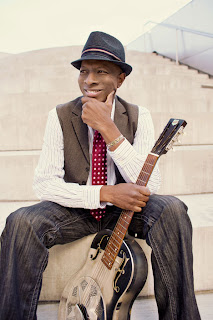 With his ever-present hat and guitar, Keb’ Mo’ looks like he could be standing at the Crossroads—a hundred years ago. In reality, few people realize one of Kevin Moore’s crossroads is the 710 freeway. Born in Compton in 1951 to parents of Southern descent, Moore immersed himself in the guitar as a child, learning the history of the blues—from the rural git-box pickers to the juke-joint slingers. In the early 1970s, he began sharing his findings with the listening public, backing psychedelic violinist Papa John Creach. But with the release of his solo debut in the mid 1990s, he became Keb’ Mo’, a blues-rooted troubadour with a grandfather-like approachability that brought him out of the blues circuit and into a wider public radio subscriber demographic.

An inoffensive blend of Delta blues and pop songwriting, 1994’s Keb’ Mo’ found a mainstream audience that helped to earn Moore a Grammy award for Best Contemporary Blues Album for his second record, Just Like You. Since then he has released six more albums of 21st-century Delta blues to an ever-widening fan base (and with cred-questionable appearances alongside Amy Grant and on Touched By An Angel). Still, when he boils it down to just voice and guitar, Moore can silence a room, whether there are 10 or 1,000 people sitting before him. His voice, a soulfully deliberate tenor, belies his origins, implying more swamps than paved rivers. And while sliding up and down his dobro’s neck, Moore’s bottle-sheathed pinky can connect a string of choice notes in a way few other performers can.

For his homecoming show, Moore will be solo, multitasking his way through some loping blues with that inimitable voice, a harmonica, a guitar and a well-heeled shoe tapping out the downbeat. Last fall he self-released a live album highlighting his charm and effortlessness before a crowd. Dust off your fedora and witness it for yourself.

No Words @ the District
Hastily posted by Cult of SOC at 7:51 PM No comments: 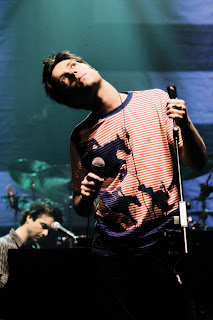 Rufus Wainwright is a busy guy. After the release of his self-titled debut in 1998—a theatrical approach to pop songwriting that highlighted his drowsy baritone, buoyed by string arrangements from Van Dyke Parks and production from Jon Brion—the piano-playing troubadour has since released four more albums, as well as a note-for-note performance of Judy Garland’s 1961 Carnegie Hall performance. The son of Loudon Wainwright III and Kate McGarrigle, two earnest folksters of the 1970s, his unapologetic blend of camp and artistry has proven too disjointed for some. Still dissatisfied with his slice of the listening pie, Wainwright has written an opera, Prima Donna, which premiered in England last summer. Although he often laments his lack of mainstream recognition, Wainwright arrived at the premiere dressed as Giuseppe Verdi, complete with top hat and beard, while his boyfriend arrived as Puccini. The battle continues with a forthcoming album and an opera to present to North American audiences. In the build-up, he has been talking to everyone, everywhere. The following is every question squeezed into an assistant-timed conference call that lasted slightly longer than it took Wainwright to operate a lemon zester on Martha Stewart.

The District Weekly: Although you live in New York now, you spent a lot of time in Los Angeles in the 1990s. Where did you stay when you were here?

Rufus Wainwright: I lived all over LA. I lived in Silver Lake and Larchmont. I lived in North Hollywood. I lived at the Oakwood apartments for awhile, which I really loved. I’m being facetious, by the way. I really consider LA the home of my career. I started out there really doing my big shows. The town has always supported me.

You got quite an extensive tour of the area’s studios. Your first album was recorded in 10 different rooms. Do you think that could happen again—that a record label would bankroll such an expensive debut?

It took me about three years to make that first album. Ten studios, at least. But I don’t know. Definitely anything is possible. Arguably, with all the components put into the mix, whether it’s the work of Lenny Waronker or the great arrangements by Van Dyke Parks or the support of DreamWorks, it was just the situation I was in. I don’t think there could be another combination of big elements like that for a new artist. The record label might spend the money, but I think it is highly unlikely to happen again.

There were supposedly 56 songs recorded over that time. What happened to the rest of that material?

They’re in my vault somewhere. I’m not at the point yet where I have to release those. I have a new album coming out called All Days Are Nights: Songs for Lulu. So I don’t need to fall back on that old stuff yet. I’m saving those for when I’m old and in crutches.

Your new record is going to be just voice and piano. What do you think you gain from that approach?

It’s as stripped-down as it gets—unless I’m singing a cappella Irish folk songs. With a lot of my albums I like to have a focus on what I am trying to accomplish. For instance, the Judy Garland record was a chance for my voice to get a good workout. Want One and Want Two were about my own personal struggles with addiction. This new album is about shining a spotlight on my piano playing. I haven’t really been given the chance to show how involved I am with that instrument. There is a lot of very intricate and also simple piano work that I’m excited to share. I’m a strong believer that a singer/songwriter is only as good as when they sing their songs alone. Like my father, sister and mother, we all fit into the troubadour tradition.

You know, I have to say that I love it—only because it really, really pays well. Artistically it is fantastic, but it’s always fun with a band. Especially when you spend a lot of time out on the road together. But I, along with everyone else in the world, have got to work to make ends meet. I have to sort of watch my ass. This is just part of the way the world is now. We all gotta tighten our belt. But there are a large amount of people in my family [for whom solo performances are] their favorite way of hearing my music.

Of all the second-generation troubadours—Sean Lennon, Jakob Dylan—you sound the least like your father. Each of your family members has very distinct singing styles. What do you think it is that you share with your family?

I think I share a kind of—how can I say this?—very, very intense tastes. You know? Both my mother and father and my sister do not suffer fools, when it comes to music. We might not have all the same opinions—there is stuff that I adore that my mother thinks is utter crap—but our tastes are really high above average. We try to imitate that. We have very high standards—a little too high sometimes.

What do you have planned for the show?

Well, I’ll definitely be singing some of the new songs. I’m in the process of working the new show and creating it. This tour is good practice for after the record comes out. I do want to present something interesting. I’ll probably play one piece from the opera. The opera is going to be performed in London in April. Very soon! Then it will be performed around America. I don’t sing in them, but I’ll go to them.

Have you played Long Beach before?

You know, I may have. I love it. I used to drive out there when I was about to slit my wrists in Culver City.

Troubador Tradition @ the District
Hastily posted by Cult of SOC at 7:50 PM No comments: