James Moody - All About Jazz 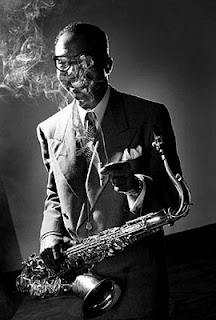 Unlike tennis players or eggs, musicians can get
better with age. Taste overrides technique, comfort
supplants competition. James Moody, now in his
eighth decade as a professional musician, does not
have to prove anything to anyone. 4B, the sequel to last
year’s 4A, is an equally eloquent stroll through the
American songbook, aided by relative young-blood
Kenny Barron on piano, appropriately named bassist
Todd Coolman and ever-present drummer Lewis
Nash. Six out of the nine songs on this album could
have been recorded at Moody’s first recording session
in 1948. The other three are provided by Barron,
Coolman and fellow tenor giant Benny Golson.

The album opens with Barron’s solo stride
through “Take the A Train” before the rest of the band
jumps in at the bridge with a brisker pace and Moody
takes the first solo with economic twists and turns. For
the ordinarily upbeat “Hot House” Moody slows the
tempo and takes an extended solo before giving way to
Barron’s nimble fingers and Coolman’s honey-toned
exploration. Tadd Dameron’s altered progressions,
alongside “Polka Dots & Moonbeams”, make up a
third of the album’s running time. “Speak Low” is
given a jaunty bossa beat while Cole Porter’s “I Love
You” gets a more romantic but similarly South
American-influenced interpretation with Barron
soloing distinctly through double-timed riffs on both
tracks. Coolman’s Pettiford tribute “O.P. Update”,
with its harmonized lines between the bass and
saxophone, fits in amidst the mid-century feel of the
repertoire. The composer’s solo states its case before
Moody jumps in with his funkiest lead on the album.
The pianist’s subdued “Nikara’s Song” and Golson’s
“Along Came Betty” serve two sides of the same coin;
the former highlighting Moody’s sensitive side while
the latter brings out his more meaty tones. A delicate,
brush-driven, start-stop take on “But Not for Me”
closes out the record with Moody tacking on a fluent
and boastful coda.

4B is a worthy companion to its predecessor with
Moody taking on songs that he could probably play in
his sleep, alongside consummate professionals who
have no trouble supporting the master with an hour of
unwavering swing and tasteful solos.


James Moody @ All About Jazz - New York
Hastily posted by Cult of SOC at 8:27 PM No comments: