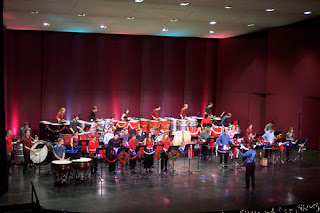 With all due respect to famed cricketsman Brian Lara, it can be safely said that the steel pan is Trinidad and Tobago’s most reverberant cultural contribution. Concave, refashioned, 55-gallon oil drums that were heard vibrating like underwater xylophones behind the calypso stars who emerged on US radio and television in the mid ’50s, steel pans have since been associated with coconuts, colorful shirts and thatched roofs. But those undulating tones were created for more than just cruise-ship tourists awaiting the arrival of their boat. The steel pan is one of the most underused and misunderstood instruments in popular music, conjuring sand-swept beaches the moment it is struck, regardless of era or repertoire.

Alongside the theremin and the synthesizer, the steel pan is credited as one of the few musical instruments invented during the 20th century. Due to its polyphonic abilities, it is not strictly a percussion instrument, reaching upward of 14 distinct pitches per drum. The steel drum’s first recorded appearance was among the carnival celebrations of its island homeland in the early 1910s before taking American audiences by storm with the calypso craze of the mid 1950s. The genre, led by the charismatic Harry Belafonte, rose to prominence with steel pans providing the blissful backings to countless calypso records currently wilting across thrift-store shelves everywhere. It took another 10 years before the instrument broke free of its Caribbean origins, poking its head out of the sand for a little chart placement and rock ‘n’ roll.

The Hollies, clean-cut Manchester boys with a deft pop pen, were up there with the Rolling Stones and the Beatles on the dreamboat scale, earning their fair share of screaming fans throughout the 1960s. Their 1967 hit, “Carrie-Anne,” was a mash of twee, pop and silliness that peaked at #3 on the UK charts. The song opens with the tight, unmistakable harmonies of Graham Nash, Allan Clarke and Tony Hicks, backed by a rackety guiro that clacks out the beat alongside a handful of other artifacts from the Caribbean cabinet. Their display of worldly experimentation culminates in a steel-pan solo that leaves many wondering why the instrument never caught on with the mods. (It would appear the sitar and harpsichord were taking up everyone’s time.) Midway through the song, the pannist flutters a baroque touch behind his own pulsing self-accompaniment, while the same strummed guitar chords repeat in the background. The solo, all 32 beats of it, is an economical achievement that goes beyond gimmick into the realm of pop perfection. Never again would the work of a pannist reach such widespread heights.

These days the steel drum has been used to play everything from Bach’s two-part inventions to the anthems of animated sea-dwelling creatures; from Swedish rockers the Knife, whose sullen Björk-in-reverse electro takes the pans into a digitized hypnosis, to Pan for Punk, a tribute record featuring Ramones covers lead by a undoubtedly pierced pannist fronting a rock rhythm section. In retrospect, it is probably best that the steel pan sticks to its beachside roots.

Thankfully, CSULB’s steel-drum band has been doing just that, steadily hammering the cans since 1986. For their upcoming West Indies-themed Christmas concert, the band will be led by percussion studies director Dr. Michael Carney, a master of the steel pans who has performed within a passport stamp of Trinidad. Nearly 50 members strong, the band will work their way through Christmas classics, as well as a few choice covers (Bob Marley’s “Jammin’”, the Beatles’ “And I Love Her”). Join them for a night of holiday cheer and dulcet-toned revelry as they present an army of steel pans and brightly-colored shirts. Dress accordingly.

Polyphonic Espirit @ the District
Hastily posted by Cult of SOC at 9:08 PM No comments: