Better than...watching half of Ken Burns' Jazz in one sitting.

Even in the heyday of jazz clubs (a day long since past) a venue was lucky if it stayed afloat for a few years. Last night, Hollywood's Catalina Bar & Grill celebrated two and a half decades as one of Los Angeles' most significant jazz clubs. It's still vibrant and swinging, but most of the attendees and performers were old enough to have been sitting at the bar back in 1986. The room was sold-out for a nearly four hour marathon of music and memories, presented by a crackerjack roster of over two dozen first-call jazzbos.

Jazz clubs, unlike most other genres, are often defined by their owners. Trying to make a living out of presenting jazz is a hands-on career that requires a physical presence few people are willing to commit to. Catalina Popescu, the club's namesake, was as much an honoree last night with every performer on stage extending their gratitude for a quarter century of service to Los Angeles' diminishing jazz community. Originally nestled on a seedy strip of Cahuenga, Catalina moved eight years ago to a cavernous business complex on Sunset Boulevard that even the biggest name has a hard time filling. With over 300 seats it is a rare treat to see the room even a quarter full, let alone standing room only on a Monday night.

The show was MC'd by KKJZ's Bubba Jackson who, along with musical director John Beasley, managed to keep the show moving fairly briskly considering the number of egos waiting for the spotlight.

Between raffles and remembrances, the crowd began to squirm and chatter before finally being silenced by the latin contigent - saxophonist Justo Almario, pianist Otmario Ruiz, trumpeter Bobby Rodriguez and percussionist Alex Acuna. They helped to rejuvenate the crowd with a rousing version of the bop standard "A Night in Tunisia" with Rodriguez doing his best to summon the ghost of Dizzy Gillespie.

Shortly afterward, electric bassist Marcus Miller took the stage to presumably test the limits of the club's sound system. His glass rattling pyrotechnics were aided by drummer Ndugu Chanceler, keyboardist Patrice Rushen and guitar shredder Lee Ritenour, who brought the energy to an undeniable peak. The evening closed with a short set by vocalist Barbara Morrison who, despite her recent health setbacks, showed that her inimitable vocal chords and stage presence were still very much intact. After a couple of tunes, her contemplative take on "That's All" wasn't enough for the crowd, as they demanded an encore. She obliged by belting out "Swhttp://www.blogger.com/img/blank.gifeet Home Chicago" with help from another vocal legend - Bill Henderson.

Each performer, a headliner in their own right, came together in a display of camaraderie and respect that testifies to the significance of a venue like Catalina to the Los Angeles jazz community. Here's hoping for another twenty-five years.

​
Sonny Rollins is one of the greatest living jazz musicians. Since his first recording session with trombonist J.J. Johnson in 1949, he has relentlessly dedicated himself to discovering the limits of the honking beast. This Thursday he's at UCLA as part of a powerhouse quintet that will likely send shivers down your spine.

That's all well and good, but has he had his picture taken with any presidents? Absolutely! Earlier this year, President Obama awkwardly bestowed the National Medal of Arts upon him. Despite jazz's origins in back alleys and brothels, the genre has worked its way into white houses and other official venues. Thus, we now present you a new feature, albeit one you will never see here again: Pictures Of Jazz Players With Presidents!

​Vibraphonist Lionel Hampton and George W. Bush
Bush goes in for the forehead kiss. ​Ronald Reagan and Ray Charles
Reagan introduces his newest Secretary of Transportation. ​Sonny Rollins and Barack Obama
Obama ponders how gray his hair will be in a year.

Hastily posted by Cult of SOC at 5:39 PM No comments: 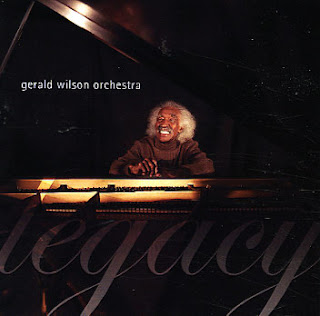 In regards to jazz textbooks, Gerald Wilson used to tell
his students, “If I’m not in it, it’s not worth buying.”
That may be boastful but it is also entirely true. Since
the late ‘30s Gerald Wilson has played, written,
arranged and conducted with some of the most
important large ensembles in jazz, from Jimmie
Lunceford to Dizzy Gillespie to Ray Charles but he has
kept some of his best material for his own orchestra.

At 92 years old Wilson is a living legend who
practically defines the sound of West Coast big band.
He could easily rest on those accolades. Instead Wilson
has released Legacy, his fifth album of original material
since turning 80. The title is an apt one but Dynasty
might be even better considering the performance and
composing contributions from Wilson’s son Anthony
and grandson Eric Otis. Armed with some of the best
session musicians from both coasts (drummer Lewis
Nash, bassist Peter Washington, saxophonist Antonio
Hart), Wilson presents a set of lush compositions that
manages to address everyone from Claude Debussy
(“Variations On Clair De Lune”) to Michael Jordan
(“Cubs, Bears, Bulls and White Sox” from his 15 minute
suite dedicated to Chicago). The album opens with
Wilson’s tribute to Stravinsky by way of Ian Fleming,
injecting a brassy swing into a “Firebird” theme to
pleasant effect. Anthony Wilson’s contribution,
“Virgo”, features meditative small combo interplay
with nice unison lines between pianist Renee Rosnes
and Anthony’s guitar while Otis’ “September Sky” fits
in with the rest of the family, sensuously gliding
through a series of descending phrases.

The second half of the album “Yes Chicago Is...” is
a set of short movements that gives the horn players a
little room to shine before returning to Wilson’s dense
cloud of brass and swing. Wilson’s graceful homage to
the Windy City is a concise display of his great writing
and bandleading talents, with punctual brass and
imaginative progressions immaculately executed by an
allstar orchestra. It is always a pleasure to hear Gerald
Wilson at work. His passion seeps from every note and
this new album only further solidifies his status. 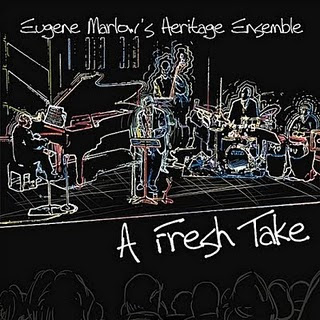 Although this is the third release by Eugene Marlow’s
Heritage Ensemble, all but one of the nine tunes here
appeared on their debut release five years ago. The
difference on this new album is that pianist Marlow
has equipped himself with the twin attack of drummer
Bobby Sanabria and percussionist Cristian Rivera,
resulting in a cross-cultural collaboration that spins
and grooves briskly throughout.

The “heritage” in question is that of the Israelites.
All of the songs performed by Marlow’s ensemble are
Hebraic melodies - a source that works primarily
because the arrangements simply highlight the band’s
camaraderie. The album introduces itself with a
popping Latin pulse that immediately showcases the
strong interplay between the drummers. Like later
track “Bilbililos”, saxophonist Michael Hashim draws
Middle Eastern-tinged riffs from his shrill soprano,
flickering throughout his range before making way for
a drum solo. “Heine Ma Tov” has a light boogaloo feel
while Marlow’s wandering introduction to “V’Taher
Lebeinu/Yis Ma Chu” evokes a little “My Heart
Belongs to Daddy” before the entire band churns
through a straightahead blast that quietly returns to its
subtle beginnings.

“Adon Olam”, the lone new addition to the
repertoire, features Marlow’s piano in unison with
vocalist Rachel Kara Perez. Singing in Hebrew, Perez’
voice drifts and sighs for most of the song but it never
really builds much and the extended jam ends with a
crash of the cymbals. The album closes with “Avinu
Malkeinu” - a percussive stampede as energetic as the
opener. Hashim wails over an unending barrage of
percussion that pushes everyone else to a frenetic pace
with great support from Marlow.

All of the tracks are tinged by a modal sensibility
that barely dances with the realm of world music.
Marlow’s use of Hebraic melodies is an interesting
idea. It isn’t necessary to know the reference material
to enjoy the album. It may help but most importantly
the album transcends the cultural specificity of the
songs and just sounds like a well-oiled jazz band
working through a set of original arrangements.