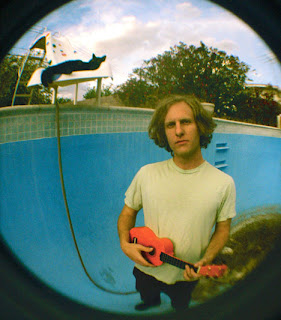 When the long-playing record was introduced in the late 1940s, it drastically extended the capacity of mass-produced albums to over 10 times their previous length. This revolution was both a blessing and a curse, allowing those with more to say (Miles Davis? Beethoven?) ample room and forcing those with less to say (the Andrews Sisters? Frankie Laine?) to fill some space. But years later when the compact disc (twice the recording space of an LP) came to dominate the local Sam Goody, few felt obligated to fill all that acquired time. Bands like Guided By Voices and They Might Be Giants were certainly stretching the track limit, but rarely did they unleash as many fully-formed nuggets as can be found on the Blank Tapes’ 80-minute album Daydreams.

The Blank Tapes is primarily Bay Area mainstay Matt Adams aided by a coterie of souls subsisting on a diet of bioluminescence and driftwood kindling—part of that hippie invitingness lurking in the fog, welcoming anyone with a melodica and a functioning lung to the party. Daydreams opens with a tumbling “And Your Bird Can Sing”-like guitar rush fed through the history of Bay Area rock, from ranch-dwelling Neil Young to suburban Stephen Malkmus. Songs like “We Can Still Be Friends” and “It’s the Best” echo with spontaneity and a solid beat that can cause any driver to casually abuse his steering wheel, while the psychedelic craftsmanship of a song like “Smoke and Mirrors” brings out Adams’ talents as both arranger and songwriter.

Whenever Adams comes to town, he always makes the most of his gas money by hitting any stage that will let him sing a few songs. In just a little over a week, Adams will perform 10 shows within earshot of our murky ocean’s air, including a swing by Fourth Street’s most valuable bookstore, {open}. Bring a chair. Without the limits of recording technology holding him back, there’s no telling how much he may have to say.

Long Player @ the District
Hastily posted by Cult of SOC at 4:02 PM No comments:

Drink of the Week - The District 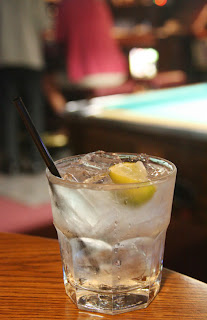 The important word to remember during an afternoon bout with the booze is “simplicity.” Three o’clock is no time for muddling or open flame. (Whether there is ever a right time for those is an entirely different discussion.) Instead, it is the hour for two ingredients—three at the most—and a few cubes of ice. And so it was that during a breezy afternoon, bound by the grid of our citrus-scented Levittown, my over-educated, under-employed ne’er-do-well friends and I were compelled to spelunk Lakewood’s Snug Harbor. Nestled in the center of an unassuming suburban strip mall, the bar’s craggy façade looms behind a few tattered lawn chairs and a sign boasting the sailor-friendly opening time of 6 a.m. The wood-paneled interior is a hospitable cave where grumbling conversationalists are interrupted only by the occasional burst of sunlight stumbling through the front door.

In an attempt to draw as little attention to ourselves as possible, we stuck to some drinking basics. 1) In the middle of the afternoon, the bartender is only there for three things: pouring drinks, turning on the TV and unlocking the door. Anything above and beyond merits an appropriate gratuity. 2) Respect the regulars. The retired magician and his bowling partner, four hours into their own intoxicated journey, do not want you anywhere near their seats. 3) Do not operate the jukebox unless the bartender knows your name. No one wants to hear the garbage you like unless they can insult you on a personal level.

For this situation, a gin and tonic played the perfect inoffensive request. None of that cucumber-tinged, herbs-and-spices hokum, just straight well rotgut with a little fizz and a slice of lime. A few of these in the afternoon kept us out of the way and off the streets. Even a retired magician can appreciate that trick.

Drink of the Week @ The District
Hastily posted by Cult of SOC at 1:46 PM 1 comment: 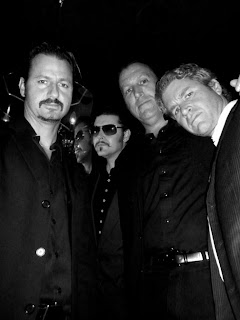 When mutton-chopped bassist Derek Smalls attempted to usher in Spinal Tap Mach II as a realization of his lifelong musical dream “Jazz Odyssey,” it should be remembered that the phase was introduced and immediately abandoned before a theme-park crowd assembled to watch a performance by puppets. The New Rome Quartet play hazy, fuzz-soaked jams of bended strings and bossa beats intended to evoke decades of facial hair and weightlessness in a self-proclaimed “intergalactic porno jazz odyssey.” Comprised of two members of pogo-ing Salton Sea rockers Throw Rag (Dan “Scorcho” Lapham on samples, “Franco” Cronin on bass) plus strummer Todd “Hornshark” Murdock and drummer “Stevo” Monroe, the quartet aims for a level of comfort approximately elbow-deep in a bag of Cheetos, free of such oppressive societal restrictions as drink coasters or pants, with the intention of providing the “soundtrack to your new-millennium nervous breakdown.”

Sonically, the New Rome Quartet snatches a lock from every cigarette-singed instrumental genre worth its weight in polyester. While the drummer propels a sand-swept vibe of starlight and sugar cane, circa 2525, the songs dip their toes in everything from Dick Dale’s first slide into infamy to the throbbing other-worldliness of ’70s camp classic Vampyros Lesbos. Fittingly, their music is best put to use as a soundtrack to something beyond complete mental collapse. The quartet performs on the fringes of a projector’s glow, backs turned to a towering psychedelic reel that befits their groove-oriented workouts engulfed in a cloud of jazz cigarettes and PBR.

Although this project does not appear to be a priority for most of these gentlemen, it does serve as a considerably less-strenuous form of self-expression than the globe-trotting whomp rock they do to pay the rent. With song titles like “Sir Pothead,” “Beer on Ice” and “Mr. Unstable,” it is obvious that they are not relying on this venture to pay for much beyond a few drinks and a night out of the house. So as the columnated Madison trembles under the weight of their loungey vibe, remember to just stay mellow.

Mr. Unstable @ the District
Hastily posted by Cult of SOC at 1:31 PM 1 comment:

My interview contributions to the District Music Issue:

HELEN BORGERS
What’s your favorite song for summer? The Edmund Velasco Quintet. Edmund is a fabulous multi-reed man, and also an exceptional composer and arranger. He has many originals—”Cat Walk” being one of my favorites. It was written to showcase his drummer, Jimmy Ford, who is a master of the brushes. It’s a terrific tune! His trumpet player, Kye Palmer, is heard regularly on The Tonight Show; a fine soloist! In fact, all the guys are great players. Mark Massey on piano is the swingin’est! Edmund has also done some WONDERFUL arrangements of Beatles tunes. They play out at Steamers in Fullerton a lot. I recommend them! I’m also proud that Edmund is a graduate of the music program at CSULB—my alma mater!
Favorite record to play during summer? Herbie Mann Live at Newport—best jazz flute disc of all time! It just sounds like summer. Captures the feeling of hanging out at the beach, playing in the surf and having fruity drinks at sunset!
Favorite drink? Decaf with LOTS of cream. At Parker’s Lighthouse, on the patio, watching the pelicans fish.
Most memorable night DJing? A coast-to-coast broadcast on New Year’s Eve from a jazz club that no longer exists (Donte’s, in North Hollywood). Jack Sheldon’s band was playing, and Harry Sweets Edison came by and sat in. WOW! And I was hosting the broadcast!
What’s the best record you’ve scored for $1 (or less)? A Louis Armstrong anthology for 89 cents. It had a great assortment of Louis, and it was my real introduction to his music. It had three tunes from the 1928 Hot Five with Earl Hines. It had Louis singing “Honeysuckle Rose” with Velma Middleton from the ‘50s tribute Satch Plays Fats, and more! The disc changed my life. I stopped being merely a Beatles fan and became a stone jazz fan. (Sean O’Connell)


DJ KNOCKOUT (KELLY OPDYCKE)
What’s your favorite song for summer? Icy Lytes’ “Chickenazo.” You can’t beat a song with a rooster crow in it.
Favorite record to play during summer? All Bangers and Cash songs, all the time.
Best part about Long Beach in summer? Well, it’s hard to beat San Pedro, but the other two Bitches Brew girls live over there, so I guess they are the best part of Long Beach in summer and all year ‘round.
Most overplayed summer jam and why? Probably anything by the Black Eyed Peas because they will never be good.
Favorite drink? Where to drink it? Kelly KoncocKtion at the Indian Room in San Pedro on Friday nights.
Most memorable night DJing? At Que Sera a few years ago on my birthday. It was for Call Sick on Friday, and people were buying me chocolate-cake shots, and they started taking off their clothes when I put on 2 Live Crew. Pretty hilarious.
What’s the best record you’ve scored for $1 (or less)? The Beverly Hills Cop soundtrack. (SO)

DJ MANVNATURE (TOM CHILD)
What’s your favorite band for summer? Grand Elegance. No matter how hot it may be in the room, by the end of the set you will be covered in a refreshing shower of beer and sweat, and not necessarily your own. As for a song, I pick “The Rain Song” because it’s rain I miss the most during this interminable season.
Favorite record to play during summer? Creedence Clearwater Revival, Cosmo’s Factory. I don’t like sweating that much, but something about this album makes it appropriate and bearable.
Most memorable night DJing? I once DJed a Filipino cotillion at a Redondo Beach Cheesecake Factory. All I was told was, “Bring ballroom dance music.” I had absolutely no idea what exactly I was supposed to do, and by the end of the evening I had begrudgingly consented to a young man’s request to play Sir Mix-a-Lot’s “Baby Got Back.” The elders were unamused.
What’s the best record you’ve scored for $1 (or less)? In Canada, I scored a slightly scratched album circa 1983 by a group of children singers called Minipops. They do pop covers, and it’s kind of creepy, but I discovered that if you put it on 45 rpm, it all sounds like happy hardcore, which takes me back to when I sat next to a raver in my drawing and painting class in high school. (SO)


Sunshine Symphony @ the District
Hastily posted by Cult of SOC at 9:57 PM No comments: