Inherit the Groove - The District 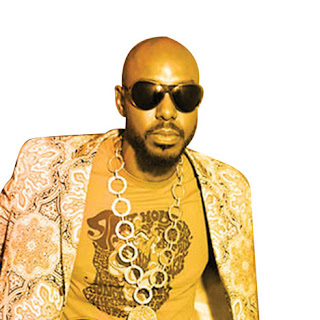 In 1973, producer/songwriter/future animated chef Isaac Hayes was at the height of his soul power, appearing regularly in his gold chain blouse, with a shaved head and sporting sunglasses regardless of the weather or time of day. That same year, Patrick “Sleepy” Brown was born, destined to inherit the same chromed dome, shades and effortless soul—and to find himself behind the mixing board and mic for some of the biggest R&B hits of the ’90s and ’00s.

Born in Savannah, Georgia, to Jimmy Brown (lead vocalist for mid-’70s funk band Brick), the younger Brown absorbed his father’s smooth sounds, becoming by his early 20s a regular in the Atlanta scene—keyboard and sampler in hand—and eventually partnering with Rico Wade and Ray Murray to form one of the biggest knob-twirling production teams of the ATL renaissance, Organized Noize. After the birth of hip-hop in New York in the ’70s and ’80s and its move west for the early ’90s, the magnifying glass was looking for something new—and found a wealth of great sounds being recorded among Georgia’s peaches and humidity.

Brown saw his earliest success with Organized Noize producing the debut album by Parliament heirs Outkast. Southernplayalisticadillacmuzik introduced a production style that melded elements of Philly soul, 808 beats and rapid-fire rhymes. Not long after, in the midst of producing Goodie Mob’s debut Soul Food, Brown joined the ranks of FM-radio immortals when he co-wrote and produced TLC’s “Waterfalls.”

It would be another eight years before Outkast and the Dirty South defied all odds with a chart-topping, everything-but-the-kitchen-sink self-produced double-album, Speakerboxx/The Love Below. Despite the fact that Brown did not produce it, he was featured prominently on “The Way You Move,” crooning over Big Boi’s hot-buttered beats. Since that dance in the spotlight, Brown has worked toward carving out a niche as a performer, in spite of numerous music-industry roadblocks. Still, his soulful vocals and party vibes make for an interesting heir to the immortal Black Moses. Be sure to wear some gold chains.

Inherit the Groove @ the District
Hastily posted by Cult of SOC at 7:12 PM No comments: