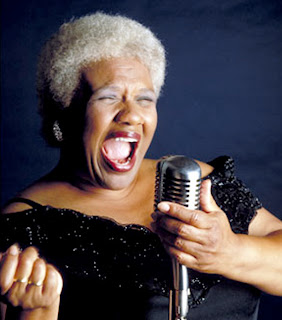 Barbara has been a friend of mine since I started accompanying her private vocal lessons on piano a dozen years ago. She is a vital part of the jazz community in Los Angeles and can use our help.

Anybody who has ever heard vocalist Barbara Morrison command a stage knows that she possesses an effervescent singing style that drips with soul and a ribald sense of humor. The Michigan-bred Angeleno has been belting out her brand of blues for over three decades in any venue with enough room to accommodate at least a dozen people doing the electric slide. She has shouted behind bandleaders like Dizzy Gillespie and Ray Charles, and has strutted alongside Tony Bennett and Buddy Guy.

Unfortunately, this summer, due to complications from diabetes, Morrison had to have one of her legs amputated. With the loss of work and mounting medical bills Morrison is in a difficult financial bind. Find out how to help her below.

"Barbara is one of the finest human beings that I have ever known in my life" says local jazz DJ James Janisse. "Her devotion to her craft and her consideration of those coming behind her are worthy of the praise given to saints."

Morrison, aside from performing over a hundred gigs a year, has also been a tireless educator. "She is a radiant and positive energy. Barbara made me feel strong and understood," recalls former student Gretchen Parlato. "She encouraged me to think about the story behind the song. As passionate and focused as she was, she also just got me to lighten up and smile, laugh and find pure joy with singing."

Due to extensive rehabilitation Morrison is looking at a few months of difficult recovery. She has had to cancel future tour dates, including a two week appearance at this year's Edinburgh Fringe Festival.

A Paypal account has been set up to help her during this difficult time, which you can access here. Hopefully Morrison will be back leading the electric slide sooner than later, as her powerful pipes and unmatched sense of humor are sorely missed.

There are 17,376 seats in the Hollywood Bowl. Sometimes it feels like there aren’t enough jazz fans in Los Angeles to staff the theater let alone pay for a show. Thus the annual Playboy Jazz Festival appeals to the widest swath of jazz fans imaginable. Over two days (June 11th and 12th) the rotating stage will host late night television’s best house band the Roots, elegant pianist Geri Allen, saxophone legend Lee Konitz, trumpeter Ambrose Akinmusire’s quintet and the SF Jazz Collective featuring bassist Matt Penman and drummer Eric Harland whose contributions to the new James Farm record helped make it one of the more impressive mainstream releases of the year. A little someone for everything. Plus you get to see Bill Cosby dance.

Later in the summer the Bowl will be hosting a jazz tribute to everybody’s favorite chain-smoking Canyon muse Joni Mitchell (August 17th). With a lineup that includes Chaka Khan and Aimee Mann they’ve cast a wide net. Herbie Hancock and Wayne Shorter balance out the jazz billing with arrangements by drummer Brian Blade. Bound to be a great night of high-quality collaboration or the most pretentious show you’ll see all summer.

For those who like their jazz with less sunburns, Gerald Wilson (still swinging at 92 years old!) will be bringing his orchestra to Catalina Bar & Grill on the Playboy weekend (June 12th). The history of jazz resides in Wilson’s fingertips from his earliest days with Jimmie Lunceford’s band to his arrangements for Ray Charles to his immeasurable influence as a lecturer for five decades. Wilson’s rich harmonies are unmistakable as is his limitless enthusiasm for the sound of music.

In that hellish tourist trap of a mall/church of celebrity known as Hollywood & Highland, KJAZZ will be hosting a free show every Tuesday evening. Amid some of the confident local fare (Barbara Morrison – July 19th, Poncho Sanchez – August 9th) is an appearance by British jazz-rock keyboardist Brian Auger on July 12th. Auger found immense success with the Oblivion Express in the UK but was never able to sell it back to the US at the same exchange rate. A limey legend.

Meanwhile downtown Grand Performances continues its wide-reaching programming with two much deserved tributes. On July 23rd the scattered veterans of Horace Tapscott’s Pan Afrikan Peoples Arkestra will convene at the head of Angels Flight to recognize the 50 year anniversary of the bands formation. Expect plenty of soul from a cross-generational collection of musicians that stretches back to Central Avenue. On August 26th drummer Ndugu Chanceler and pianist Patrice Rushen will pay tribute to Quincy Jones – one of many men that owe a fair amount to Gerald Wilson. Chanceler, a regular fixture on the Los Angeles jazz scene, was the man who laid down the drums on Michael Jackson’s “Thriller” while Rushen, who receives a sizable check each year compliments of Will Smith for his use of her 1982 hit “Forget Me Nots”, is an expressive instrumentalist who can swing with the best of them.

(What am I missing here? Hip me to your gig. cultofsoc@gmail.com) A lot can be said about a musician by looking at his employers. By the time bassist Juini Booth was 30 his resume included experience alongside some of the most significant jazz artists of the 60s and 70s with an emphasis on some of the greatest drummers of all time: Art Blakey, Shelly Manne, Tony Williams, Elvin Jones. His innate sense of time and reliability as a role player has given Booth a career that most people could only dream of.

Born in Buffalo, New York in the late 1940s, Booth began skipping school to make dates with Chuck Mangione and his brother Gap while he was still a teenager. Inevitably Booth broke off for Manhattan where he befriended drummer JC Moses at the East Village club Slug’s. Moses, who lived only lived a few blocks from the venue, introduced Booth to some of his friends: Hank Mobley, Paul Chambers, Kenny Dorham, Philly Joe Jones. “Here’s this little young guy hanging around. So they found a use for me,” recalls Booth. That use turned out to encompass everything from Ron Carter’s castoff gig catching curveballs from Coleman Hawkins at the Village Vanguard to a lifelong affiliation with the Sun Ra Arkestra. “Sun Ra was an amazement. It was not a band for the faint hearted. And it still isn’t.”

While still a teenager Booth received his greatest education by replacing Reggie Johnson in Art Blakey’s Jazz Messengers. For two years he criss-crossed the country, five to a car, with every instrument case strapped to the roof, playing every night alongside Blakey’s thunderous high-hat. “He taught me something,” says Booth. “He gave me some muscles.” Unfortunately, due to a little problem with the IRS, Blakey was dealing strictly in cash during Booth’s tenure and no recordings were ever made of that band.

Eventually Booth left the group to join Messenger alum Freddie Hubbard – a band he would subsequently quit and rejoin three times. Following his first stint Booth set out for a change of pace in California where he befriended drummer Shelly Manne and was never at a loss for work. “I got to play with all the West Coast guys – Bud Shank, Buddy Collette, Harold Land, Gerald Wilson.” While enjoying the Pacific air Booth landed two life-changing gigs in a week: a night outside San Francisco with Cannonball Adderly’s quintet and a set with Thelonious Monk at the 1969 Monterey Jazz Festival. “It was an incredible week,” recalls Booth. “I could have died and gone to heaven. I didn’t really know any of Monk’s songs but Monk liked it.”

After a year of fun and sun Booth returned to New York debunking a rumor that had spread quickly. “Milt Jackson said to me ‘Juini, there’s a rumor you’re dead.’ I came back and everybody’s doing a double take, like they’d seen a ghost.” In New York, Booth played on Gary Bartz’s Harlem Bush Music albums, participated in the avant-garde loft scene and rejoined Hubbard’s band for another few paychecks before joining up with Tony Williams’ Lifetime. “Things were changing. I started playing electric bass. My ears rang for ten years after that.” This unit also went regrettably unrecorded but there are a few bootlegs circulating of the Lifetime band in Europe with Booth hiding in the shadow of his amplification with organist Larry Young in a keffiyeh seated behind him – a far cry from that week in a West Village basement with the Bean.

His time with Tony Williams, like many of his other gigs, was short-lived and Booth returned again to New York picking up work with McCoy Tyner, who had spent 9-months as a Messenger. “I was off and on with McCoy for five years. We did some duo gigs and trio gigs,” says Booth. “His left hand. It would break the thickest strings on the piano. Way down at the bottom. I had to get out of the way sometimes.” After a few recordings Booth’s restless bass led to work with Elvin Jones. “It was loud but it was musical.” He appeared on the aptly titled Time Capsule alongside Kenny Barron and George Coleman before striking out on his own again.

Starting in the early 80s Booth began focusing on solo bass work, earning recognition from the International Society of Bassists and National Endowment for the Arts. Although he still occasionally performs solo Booth can often be found on the fringes of Alphabet City playing an electric bass with his band I Led 3 Lives at ambient space-lounge Nublu. Despite forty-plus years in the business Booth still looks like the youngest guy in the room playing a blend of house, reggae and swing well into the morning. But for all his accomplishments Booth is not just sitting around talking about the good old days. He is focused on the future with plans for a solo record and numerous other projects that will take him around the world but always, inevitably, back to New York. “I’m a loft session Wildflower. I’m a Sun Ra satellite. I’m a Coltrane-ite. I’m a Jazz Messenger. I’m a Tony Williams Lifetimer. I’m all these things. I look at it and I say ‘Well, that’s wonderful’ but it also says that I never did something of my own. And this I’m trying to change.”

Juini Booth @ NYC Jazz Record
Hastily posted by Cult of SOC at 9:51 AM No comments: