Buskers are few and far between on the sidewalks of Long Beach but for one day only, a handful of bands have the approval of the city and a few electrical outlets at their disposal. There seems to be an unintended theme of family bands this year, real and fake, whether that means siblings in harmony or a lingering generational legacy hovering just above the fretboard. Buskerfest is the culmination of Long Beach's stellar outdoor concert series and they are closing out 2013 with a roster loaded with some local bands. Support your neighbors. Here's a group of bands that you should be sure to catch.
Brother C and Sister J

Who'd have thought the heyday of guitar/drum duos that play an unhinged Bo Diddley rumble would last so long? Brother C and Sister J took their cues from that Detroit duo that pretended to be siblings in the early '00s. Brother C even has the tight pants and vocal quaver that drives all the girls crazy. The differences come in the little things. His guitar sound digs more into a Texas blues with a funky twang that keeps things moving and Sister J is a much more capable drummer than that other disbanded group. She pummels an even tempo and does more than just let her hair blow in the wind. This set will likely have a lot more heavy riffs than the other.
Hedgehog Swing

Gypsy jazz instantly makes anything Woody Allen writes twice as madcapped. That's a cinematic fact. So perhaps when Hedgehog Swing hits the stage you'll receive a text from someone having an affair on a boat or maybe just Alan Alda. Guitarists Luca Pino and Gage Husley have clearly been studying the Reinhardt handbook. Their strum and swing is nimble and tasteful. The addition of a clarinet to that sound sometimes takes things a little too far into the Klezmer corner but that can be forgiven. This is a nice alternative to the more rocking offerings on the bill.
Carly Ritter
The newest generation of Ritter kids are mostly recognized for being the children of John (Three's Company, Problem Child) but it is often forgotten these days that John was known to many as the son of Tex. The singing cowboy had a string of hits in the 1940s and his granddaughter Carly is returning to those roots. The gentle songstress has a patient lower register and penchant for love songs with an easy going band that combine a pleasant early evening sound. Maybe she'll even cover grandad's "I Dreamed of A Hillbilly Heaven."
The Fling
These scruffy, plaid-clad rockers have a Mersey Beat-friendly vibe with a hay-flecked tinge and three members with names ending in "ustin." Their thoroughly modern rock sound features democratically dispersed lead vocal duties and spacey guitars. It is kept grounded by a steady backbeat swaddled in soothing dynamics and rich harmonies. With a new album in the can, the Fling are poised for radio domination.
He's My Brother, She's My Sister
This vibrato-riddled, sibling-led band has a good time vibe that should make for a nice closer. The thrift store ensemble features a greaser bass player (completely with spinning bass), slide guitarist and a percussionist who stands atop a bass drum outfitted with tap shoes. The raucous, full-throttle band lives up to that sort of instrumentation with a perpetual stomp. They seem like the kind of group that might rattle the top of your head with a pair of mallets if they thought it would get a nice, hollow sound and you'd probably smile while they did it.
Buskerfest @ OC Weekly
Hastily posted by Cult of SOC at 10:43 AM No comments: 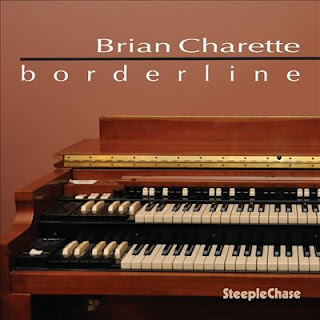 Few people can get away with playing solo organ. Churches and ballparks will hire someone to employ all their limbs for the congregation but it's a rare sight to get a jazz organist alone. Brian Charette, on his first solo organ album, tackles a lot of the standard repertoire but doesn't hesitate to throw a few curveballs into the mix. Many of those old chestnuts can get a little hokey, unable to slip out from the inherently loungey trappings of the instrument. Numbers like "Tico Tico" and "Girl From Ipanema" carry on with all the components of that organ grinder sound, hanging just this side of Walt Wanderley but Charette seems well aware of those songs' reputations and not particularly concerned about liberating them from their populist history. When he slows the pace and lets the instrument resonate, there is an undeniable sweetness to his sound that goes beyond any cultural context. "Georgia" and "Body and Soul" take on a smooth, bluesy hum that shows off the instrument's relaxed capabilities while a blistering ride through "I Got Rhythm" showcases Charette's quick-fingered mastery of the instrument. The unexpected numbers however have a weight far more than one might think they are deserving of. Hall and Oates' "Sara Smile" gets a soulful slide while Bond theme "You Only Live Twice" plays with the multi-tasking aspects of the hulking keyboard for a soaring mediation. But it's the title track that takes the biggest cojones. There can't be that many straightahead jazz albums named after a Madonna song, so cheers to Charette for taking it there. The performance of "Borderline" works. The bouncy interaction between the basslinea nd melody are seamless, coupling recognition and disbelief in the same measure, while seemingly opening up a largely untapped musical corner for playful improvisation.

Charette @ DownBeat
Hastily posted by Cult of SOC at 10:41 AM No comments: 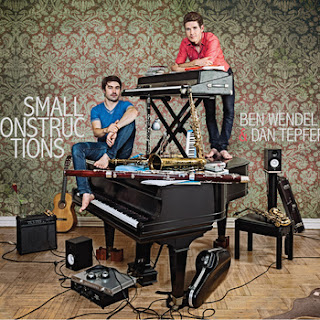 From the front of Small Constructions a couple of cleancut,
barefoot dudes rest on top of a rather expensive
musical instrument surrounded by the many other
expensive musical instruments they used to create this
album. Those 20 fingers and four ears managed, in just
four days, to record a dozen tunes testifying to their
telepathic sense of understanding and mastery of the
studio. The approach employed by pianist Dan Tepfer
and saxophonist Ben Wendel is quite a sound,
generating a two-man orchestra in minutes.

Wendel and Tepfer penned four tunes apiece while
the final track, “Oblique Strategy”, is a collaborative
party trick that transcends the idea. The duo trade
instruments for a reflective ballad, an appreciated
closer for a whirlwind recording, fitting perfectly into
the scope of the album.

A pair of Monk tunes, “Pannonica” and “Ask Me
Now”, highlight their respectful interpretations with
sensitive, straightforward readings. On “Line Up” the
duo simultaneously channels Wendy Carlos Williams
and Lennie Tristano, launching into a dizzying display
of technique and production that can leave the listener
breathless, never mind the musicians. It’s a remarkable
display that warrants countless listenings and no
doubt many failed attempts at recreation in basement
practice spaces. A similar vibe penetrates Tepfer’s
“Nines” as an ominous oscillation fills every beat,
Wendel dropping cartwheels over the tension.
“Gratitude” slows the affair with a rich layer provided
by no less than six horn overdubs and a stretched
melodica resembling high strings. The duo even digs
into some Handel with “Variation 1 in D minor”.
Wendel sets up a seamless four-part harmony, his
bassoon holding down the gentle sway, as Tepfer
conjures his own slow and swinging Baroque phrases.

There is a natural apprehension to overlyproduced jazz
recordings but Wendel and Tepfer have created a winning
combination of studio magic and musical wizardry.
When they dig into a pocket symphony, every sound
is essential while they frequently focus on their two
live voices interacting. The result is rich and impressive
and thankfully still deeply rooted in spur-of-the-moment
improvisation.

Dan Tepfer/Ben Wendel @ NYC Jazz Record
Hastily posted by Cult of SOC at 10:34 AM No comments: 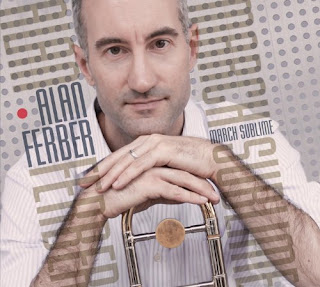 The concept of a sublime march sounds a little
strenuous. Most organized walking isn’t that great but
maybe it’s a reference to the month. Whether
trombonist Alan Ferber is enlisting in the army or
awaiting the change of seasons, he has brought along a
tremendous group of musicians to join him. Ferber
composed more than half of the tunes, nearly all of
which provide ample space amid the arrangements for
the limited solo count to maximize exploration.

His take on Björk’s slow-burn “Hyper-Ballad” is
much less restrained than the Icelandic original. Horns
rise over a quivering synthesizer before drummer
Mark Ferber adds a militaristic groove. Keyboardist
David Cook is gradually left alone to build the tension
before a smattering of brass dances over aggressive
handclaps. The manic swell leads to an engaging
exchange between trumpeter Alex Norris and
trombonist Ryan Keberle. “Wildwood”, an homage to
the site of Ferber’s Northern California wedding, gets
a designated intro track, then launches into the rich
ballad. The horns move cautiously before guitarist
Anthony Wilson takes a quivering solo over the
deliberate rhythm section. The title track is regulated
by Mark Ferber’s snare drum. Trumpeter Taylor
Haskins caws with a persistent echo effect before the
band bounces in on an uptick. Alan Ferber takes a
mournful solo, sighing like stardust above Cook and
bassist Matt Pavolka’s prodding. Haskins closes the
tune with a hazy return. Ferber’s “The Compass” flies
in within a straightahead horn blast. Tenor saxophonist
John Ellis builds up to a rousing horn accompaniment
while trombonist Josh Roseman summons the
Framptone for a muted solo, which converts that
human-like trombone quality into a vocoder. It’s a
unique effect eventually abandoned for a well-spaced
rip alongside the band.

On this record, Ferber has presented a modern big
band with modest touches of the strange and electrified.
Ferber can bend and mold many voices into an
engaging whole and he seems happy to share his forms
with a talented array of instrumentalists.

Alan Ferber @ NYC Jazz Record
Hastily posted by Cult of SOC at 10:31 AM No comments: 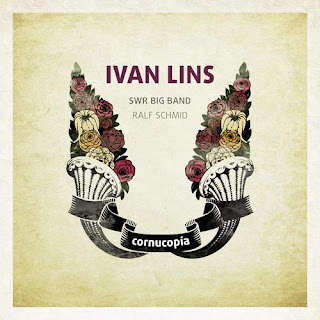 This project is a combination of a lot of phone calls. Brazilian vocalist/composer Ivan Lins is joined by the Germand SWR big band and, briefly, a South African choir. The 13 dense tracks were recorded in five different recording studios on four continents. Those passport stamps are clearly reflected within the first 30 seconds of the album when Themba Mkhize's choir kickstarts the proceedings before a wailing saxophone joins the fray of spiraling keyboards and a sputtering horn section. Eventually Lins joins with his sleek tones and pop sensibility. This doesn't feel so much like a big band album as a Brazilian pop record with a lot of instruments. SWR moves primarily as a unit, offering bright brass throughout but with not enough emphasis on solo opportunities. Squiggly laughter and other sound effects dot the landscape, adding a playful vibe. "Todo Mundo" has an enthusiastic bounce complete with Carnival percussion while "Roada Baiana" has a stop-start hi-hat that is refreshingly disjointed and pleasantly upbeat. But a sort of sameness pervades large parts of the recording, a formula that gets a little predictable as the album moves along as though every musician should be on every track. SWR is an immaculate big band that moves seamlessly through their arrangements and Lins is a sensitive vocalist, but it reaches an over-saturation point early on and never lets up.

Ivan Lins @ DownBeat
Hastily posted by Cult of SOC at 10:26 AM No comments: 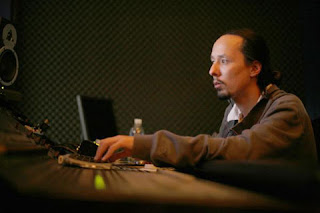 Hip hop producer Daddy Kev has been transfixing audiences since the late 1990s and has been attracting well-deserved attention for his weekly party night Low End Theory since 2006.