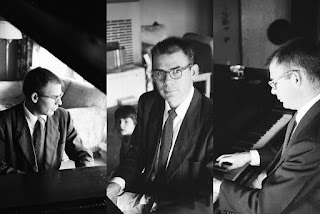 There is a small, disorganized box of CDs squeezed into the back of my garage labeled: “Demos, 2000s.” The box isn’t so much for me. I know what’s on those CDs because I played piano on every track. The box is for my daughter.

Long after I’m gone, crushed by a shipping container on the 710 or mistaken for a koala bear by a famished mountain lion, that box will be proof to her that Dada was hip for at least a little while. Two fantastic new albums featuring the late jazz pianist Forrest Westbrook provide a glimmer of hope for any artist who has ever felt a little underappreciated.


Forrest Westbrook was barely a household name in his own house. The hard-working musician played battered pianos across Southern California, often leaving his best ideas among the clouds of cigarette smoke and two drink minimums. He died two years ago at the age of 86, overlooked and under-recorded.

But when his daughter Leslie sorted through his stuff, she found swinging reel-to-reel tapes of sessions he had masterfully engineered in his Hollywood apartment dating back to the late 1950s and early 1960s. She knew they had to be heard and through a partnership with the Spanish jazz label Fresh Sounds, Forrest Westbrook is finally finding a bit of recognition.

Last year, the first of the Westbrook trove was released as the Carmell Jones Quartet featuring Forrest Westbrook. Recorded in 1960, the cuts were intended as an audition tape for Jones for Pacific Jazz records, a local tastemaker that launched the careers of musicians Chet Baker, Gerry Mulligan and Les McCann.

At the time of the recording, Carmell Jones was an explosive, 24 year old hard-bop trumpeter from Kansas City. He arrived on the West Coast looking for fame, fortune and a record contract. Less than a year later, he crossed one of those goals off the list: releasing the first of three engaging but underselling albums. Within five years he had moved on to New York and eventually Europe. He made his most widely-heard recording alongside saxophonist Joe Henderson on Horace Silver's Song For My Father, a cornerstone of mid-60s Blue Note soul.


On Jones’ session, the quartet eases into the heat with a simmering “Willow Weep for Me.” Bassist Gary Peacock and drummer Bill Shwemmer work on a subdued groove while Jones slides in on buttered valves. A double-time piano solo briefly enters into the finger-popping realm but the grooves reach their peak later on “For Every Man There’s A Woman.”

There, Jones’ fanfare unfurls over a blues march, leaving the Earth’s atmosphere with a precise jolt. Westbrook is equally forceful, twisting around the confines of the piano’s lower register.
Westbrook only ever released one album under his name, a 1970 free jazz LP called This Is Their Time, Oh Yes. But these new tapes prove that a decade prior he had a unique voice — linked equally to then-contemporary pianists like Lennie Tristano, Red Garland and Errol Garner. He had a deep well of nimble flourishes far hipper than many of the so-called West Coast jazz pianists.
Recorded two years earlier than the Jones session, the Forrest Westbrook Trio & Quintet finds Westbrook in a knottier bag, doubling back on rumbling lines on a crisp “I’m Getting Sentimental Over You” and evoking Dave Brubeck with a mid-tempo “In Your Own Sweet Way.”  Following a particularly exuberant solo on the Charlie Parker blues “Buzzy” it is either bassist Bill Plummer or drummer Maurice Miller who can be heard shouting “Yeah, Forrest,” an affectionate encouragement that exemplifies the homespun charm of Westbrook’s tapes.


These albums are a delight, but the pleasure is bittersweet. Westbrook was a great talent unearthed a little too late. If it wasn’t for his daughter’s determination, much of the record-buying public would never have even known his name. I’m sure her Dada would be proud. 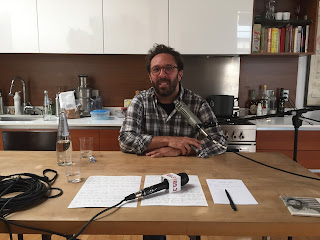 If there’s such thing as royalty in the Los Angeles jazz scene, Anthony Wilson is a prince. He’s a guitarist who’s worked with Paul McCartney, Leon Russell and Willie Nelson. For a day job, he plays guitar with singer Diana Krall. His father is the late Gerald Wilson, a trumpeter and big band leader who arranged for musicians like Ray Charles, Duke Ellington, Ella Fitzgerald and more.
Anthony Wilson’s also a solo artist, with a handful of albums under his belt. For his latest record, "Frogtown," Wilson explored personal themes like love, death and family. "Frogtown" also marks the first time the guitarist has picked up a vocal mic.
Off-Ramp jazz correspondent Sean J O’Connell met Wilson in his Arts District apartment to talk about how he made the transition.


On "Frogtown," his latest album

It's named after a neighborhood here in Los Angeles between the 5 Freeway and the L.A. River. I used to live nearby there and I walked quite a bit through the neighborhood. It's sort of an odd place that feels a little bit lost in time. The album itself, I consider it to be a collection of musical depictions of very specific moods, or feelings, or stories. That door opens and we keep you there.

On singing live for the first time

Just to begin to open my mouth, and begin singing after years and years of not doing it, and being identified with purely instrumental music... to sort of go to the first gig and sing the first song that I had written in front of that audience — it was like jumping off a cliff.
Some of the songs on the record definitely touch on quite tender emotions, stories. The one I'm thinking of right at this moment is a song called "Our Affair" — which was definitely not easy to write or to sing. It's about my mother and my father, they met while he was married and had a family. They had an affair, which lead to me being born.

On the legacy of his father, bandleader Gerald Wilson

My father moved to Los Angeles to 1944, I believe, and started his first big band. He loved this city. I heard him speak so many times about what it was like for him to see L.A. for the first time, and experience it for the first time. And I put myself in his shoes and imagined what kind of feelings he must have experienced, being on Central Avenue within the whole black community in Los Angeles at that time.
It echoes of him constantly in other peoples' work, though you might not always hear the credit given.

On transitioning out of instrumental jazz and into vocal pop music

I love that. I mean, in a sense that has been one of my kind of building frustrations with playing instrumental music only. What if songs could be more specific?
Jazz musicians will play a song, and they'll say "this is my song, titled 'X' and it's about X." But Instrumental music can never be about X, really. Instrumental music is simply sound being played. As much as people who play instrumental music want to say that their songs are about something, it's actually not quite true.

Anthony Wilson @ KPCC's "Off-Ramp"
Hastily posted by Cult of SOC at 10:00 AM No comments:

On the Couch with Emitt Rhodes - KPCC's Off-Ramp 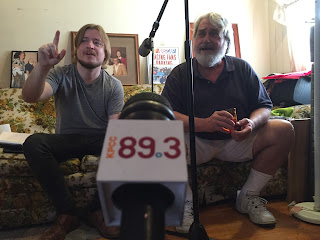 I got to spend an hour in Emitt Rhodes' living room in Hawthorne, California. He recorded a lot of great stuff there a long time ago. Someone finally got him to record some more great stuff again.

For the first time in 40+ years, he has a new album out. It's good. Sort of a Gerry Rafferty toasts Warren Zevon sound, an evolutionary step forward from his late 1960s/early 70s days as a composer/engineer/instrumentalist/lyricist pop master.

It's called "Rainbow Ends." It was released on Omnivore Recordings. Nels Cline has a great guitar solo. Susanna Hoffs does some sweet background vocals. Aimee Mann & Jon Brion do their thing and they do it well.

The interview I conducted was turned into this story for KPCC's Off-Ramp.

Hastily posted by Cult of SOC at 5:09 PM No comments: