Me, the Mob, and the Music - LA Record 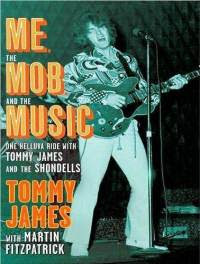 Tommy James
Me, the Mob and the Music - One Helluva Ride with Tommy James & the Shondells

Midwesterner Thomas Jackson found fame, and a little fortune, through a cover of Brill Building fluff "Hanky Panky". Attracting a fair amount of radio play Jackson slowly made his way east until he landed in the hands of Morris Levy - Roulette Records owner and infamous payola king to Alan Freed. In Manhattan Jackson became James and the Raconteurs became the Shondells and for the next four years he owned the pop radio charts with hits like "I Think We're Alone Now", “Mony, Mony” and "Crimson and Clover". James details these years as a pop phenom as well as where all that money may have gone. James seems both thankful and betrayed by the man who made him a household name while profiting off of his work, praising Levy for his artistic freedom in the studio while also noting all the fishy behavior and mercenaries/label heads Levy employed who were occasionally found dead, if found at all. James was one of few artists to successfully transition from bubblegum pop to pyschedelic rock (with very little help from hallucinogenics) and eventually cashed in on it thanks to 80s new wave covers by Billy Idol and Tiffany. Overall James seems astonished by his success, writing about his time working with Hubert Humphrey’s presidential campaign and passing on a slot on the Woodstock stage with little resentment towards those who owed him millions of dollars in back royalties. It is a wide-eyed account of a dark and brutal business told in awe at having survived it.

With a dearth of good jazz rooms in Los Angeles it is up to the major institutions to fill in some of the blanks for open-minded ears. Sometimes they pull through and sometimes they don’t. But if you comb through enough calendars you can piece together a season’s worth of entertaining veterans as well as handful of jazzbos in the midst of ever-evolving projects. In Keith Richards’ nursing handbook/autobiography Keef goes so far as to describe drummer Zigaboo Modeliste as “one of the best ever”. He may be right. Modeliste’s hard-driving drums provided the support for the Meters from the very beginning thus providing the backbeat for countless hip-hop samples throughout the decades. Although it appears that the Mint has totally given up on the jazz bookings, on January 20th they’ll redeem themselves with a solid funk act.

Disney Concert Hall kicks off the year with two disparate performances starting with Brad Mehldau’s engaging Highway Rider project featuring saxophonist Joshua Redman, two drummers (Jeff Ballard and Matt Chamberlain) and a chamber orchestra on January 21st. The album, produced by wunderkind Jon Brion, is a lush genre-less collaboration that should translate well to the stage with enough brooding to last a lifetime. February 15th sees the Jazz at Lincoln Center Orchestra, keepers of the old-school flame, wearing their swinging tuxedos under the direction of the self-appointed arbiter of jazz, Wynton Marsalis. Why doesn’t the LA Philharmonic have their own jazz orchestra? At the Getty spidery ax-master Nels Cline performs a concert on February 5th with his “singers” as well as his lady-friend Yuka Honda. Cline, who has been slinging for Wilco lately, can just as easily summon the murderous shred of John McLaughlin as he can the Allman brothers. Cline’s fleet-fingered pyrotechnics are always worth the trip and this one is free! At Largo Martha Wainwright will perform an entire show of Edith Piaf tunes February 11th and 12th. As Rufus’ kid sister, shouldn’t she be doing an evening of Mickey Rooney routines? Ah, la vie en Melrose.

There are also a few noteworthy events occurring a few miles down the 5. Keely Smith became a household name when she began performing as a sort of Tin Pan Alley Alice to Louis Prima’s red-sauce Ralph Kramden – rolling her eyes and belting her way through riotously charismatic pop tunes. Smith, now in her late 80s, brings her dead-pan bob to the Cerritos Performing Arts Center on February 13th to conjure a little of that very old black magic. The Orange County Performing Arts Center can be one of the most interesting sources for mid-tier touring jazz acts. For awhile there the Center could draw enough tuned in subscribers to sip some chardonnay and see what New York had to offer without having to venture beyond Long Beach. These days the shows aren’t as adventurous but on March 4th Chick Corea and Gary Burton definitely have the potential to transfix with their 40-year history of exhaustingly meticulous arrangements. If you want even older people drinking even older chardonnay you can dig out a few gems at the Newport Jazz Party between February 17 – 20th. Aging young lions Benny Green, Lewis Nash and Eric Reed lead their own ensembles while clarinet sensation Anat Cohen makes a rare appearance outside of downtown New York.

One of the joys of living in Los Angeles is that you can attend outdoor shows in November without needing clothes stuffed with goose down. LACMA keeps up their jazz series through to Thanksgiving and they have booked some music worth a jaunt down the Miracle Mile. Harold Land Jr., piano-playing son of the West Coast saxophone legend has been playing around Los Angeles for years. On October 29th he’ll bring his tasteful sense of swing and unchanging facial expression to the courtyard with some help from local vocalist Rita Edmond. A couple of weeks later the invaluable Littleton Brothers return to share a bill. Between Jeff, the bassist, and Don, the drummer, the Littleton boys have probably played with every major jazz musician to set foot in Los Angeles in the last twenty years. Their encyclopedic knowledge has kept them in constant demand and here they finally get to call the tunes.

With colleges back in session some of the more respectable halls get dusted off and unlocked. That cathedral out in Westwood is hosting some of the most regal jazz available. Avant sage Ornette Coleman returns to Royce Hall with his son Denardo. They recorded their first album together in 1966 when Denardo was only 10. Witness one of the most polarizing characters in jazz - 62 years running. A few weeks later an all-star cast will converge to honor Alice Coltrane. A recently passed legend and a tremendous holy link to the Church of John, Coltrane was a Bud Powell devotee before carrying the torch into the 1970s as the widow of Impulse. Her meditative composure and glissanding harp are regrettably over-shadowed by her social status but the proof is in the wax. Led by TV on the Radio’s Kyp Malone and featuring Nels Cline and Pharaoh Sanders, the band will dig into what could be completely amazing or a total mess. Or a little of both.

A little further from the ocean, Chucho Valdes, the Cuban Art Tatum, hits up the Luckman Fine Arts Complex on October 16th alongside his Afro-Cuban messengers. One of the most astounding pianists touring the planet Valdes can leap from spitfire montunos to Chopin-esque agility in seconds. A rare treat in the heart of East LA.

Meanwhile downtown, merry evangelical prankster Reverend Billy, with his street corner preaching and Wayne Cochran hair-do, returns to California on October 21st for a little west coast exorcising. The Life After Shopping Gospel Choir, his rag-tag bunch of robed disciples, channel his anti-commercialism message through song. In the past year he ran a legitimate campaign for mayor of New York as well as getting arrested for putting a hex on JPMorgan Chase. It’s a sincere put-on, part Jimmy Swaggart, part Andy Kaufman. But when the choir gets going there is no denying his preacher-blues transformation. December 20th, however, through the garage and up the escalator at Disney Concert Hall, the Blind Boys of Alabama will lay down some real gospel. Formed in the early 40s the group has found its largest audience in the 21st century performing songs by the likes of Tom Waits and Curtis Mayfield. Think they’ll cover “Pasties & a G String”?