From the percussive wars of Gene Krupa and Buddy Rich to the venomous barbs brandished between Jay-Z and Nas, a little musical competition always benefits the listener. Without rivalries, friendly or not, the world may have been deprived of such important works as Pet Sounds and “Sweet Home Alabama.”

At Motown Records in the 1960s, under the watchful eye of enterprising young Berry Gordy, there was constant pressure to produce hits. There were two primary songwriting factions at work in the Hitsville studio: velvet-voiced Smokey Robinson and the mighty Holland-Dozier-Holland. Robinson had been with the Motown organization since its inception, having co-written music with Gordy in the late ‘50s. He wrote most of the songs for his own band the Miracles (“Shop Around,” “I Second That Emotion,” “You’ve Really Got a Hold on Me”), as well as for other performers in the fleet such as Mary Wells, Marvin Gaye and Brenda Holloway.

Holland-Dozier-Holland were songwriters Lamont Dozier and the two Holland brothers, Brian and Edward. Their partnership resulted in such hits as “Heat Wave,” “Where Did Our Love Go” and “This Old Heart of Mine.” Their production and songwriting skills were essentially what defined the Motown sound, along with the Funk Brothers in the mid-1960s: smooth harmonies, tight rhythms and an omnipresent tambourine.

Appropriately enough, both the Temptations and the Four Tops were from Detroit. The Temps, with their high-intensity dance moves and outrageous costumes, found success with Smokey. “The Way You Do the Things You Do,” “My Girl” and “Get Ready” all worked their way into the top 10. Fronted by silky-smooth baritone Levi Stubbs, the Tops sang some of H-D-H’s greatest hits: “I Can’t Help Myself,” “Reach Out I’ll Be There” and “Standing in the Shadows of Love.”

Now more than 50 years old, Motown enjoys its status as one of the most important American record labels ever. Not as gritty as Stax or Chess, Motown found success courting suburban teenagers with its motto “the sound of young America.” Without the hard work of the Four Tops and the Temptations, Motown’s legacy would not be nearly as valuable.

Sibling Rivalry @ the District
Hastily posted by Cult of SOC at 10:20 AM No comments: 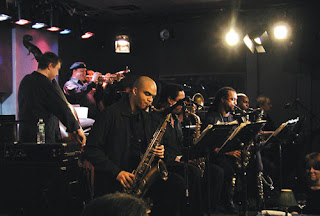 Kind of Blue. Time Out. Giant Steps. The Shape of Jazz to Come. Mingus Ah Um. For many music fans, the albums of 1959 define modern jazz. These records featuring Miles Davis’ modal breakthroughs, Brubeck’s unorthodox time signatures, Coltrane’s sheets of sound and Ornette Coleman’s limitless structure opened up a bottomless pit of possibility for every merchant of swing. Mingus Ah Um, a larger ensemble workout that took the reins from Duke Ellington and filtered them through an angrier pen, was driven by the distrust and undeniable sense of determination flowing out of upright bassist Charles Mingus.

The angry young man from Watts was his own worst enemy. Prone to onstage fights, he barreled his way through gigs with Louis Armstrong, Lionel Hampton and even Ellington—canned by all of them. Eventually, he built enough of a reputation to lead his own bands and dispensed abuse without fear of losing the gig. His book, Beneath the Underdog, is one of the greatest fictional autobiographies ever written—up there with Billie Holiday’s Lady Sings the Blues or Mezz Mezzrow’s Really the Blues. Full of bullshit and bravado, Mingus dishes about everything—sexual conquests, emotional hang-ups and even the occasional recording date—with a deranged disregard. His behavior was so important to his music that the liner notes to his epic The Black Saint and the Sinner Lady were composed by his psychologist.

Mingus Ah Um, Mingus’ first release for Columbia Records, is a vast collection of styles, with oscillating harmonies in tribute to Lester Young on “Goodbye Pork Pie Hat,” the freight-train drive of “Boogie Stop Shuffle” and a two-step strut opening up “Jelly Roll.” The compositions and the octet’s instrumentation all grew out of Mingus’ earlier experiments known as the Jazz Workshop—an idealistic, at least in manifesto, co-op of composers shaping their ideas via committee. The Workshops, outside of the studio, were something altogether different, bringing Mingus’ temper to the fore; but the album, 45 minutes and nine tracks, was recorded in just two days.

Fifty years after the record’s release, the Mingus dynasty is alive and well. Headed by Mingus’ widow, Sue Graham Mingus, Jazz Workshop Inc. has built a fleet of bands dedicated solely to the work of Charles Mingus. Composed of some of the best musicians in New York (Jeff “Tain” Watts, Sean Jones, Orrin Evans), the unparalleled organization takes on the Mingus legacy, not preserved in nostalgic amber but where it might be now had he still been growling across the stage with trembling young-bloods. The organization doesn’t just capture his great compositions but also evokes his performance philosophy, with arrangements changing on the fly in response to the crowd or a particularly hot soloist (no word on whether any of the new members have taken to clobbering each other on stage).

At home in New York, the Mingus organization takes over a midtown basement every Monday night. The man holding down Mingus’ post is Boris Kozlov, who has been playing bass for the band since 1998. In New York, he gets to play Mingus’ actual instrument, which Kozlov nonchalantly describes as “just a good bass with a lotta spiritual value.” The key to keeping things fresh, says Kozlov, is a “multiplicity of approaches, being myself and trusting the guy next to me. If the tune doesn’t evolve, it gets to be strange and goes against the original purpose of the whole thing.”

Hastily posted by Cult of SOC at 11:56 PM No comments:

To A Sheen - The District 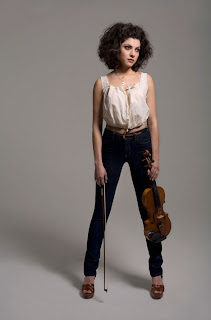 Fiddler/vocalist Carrie Rodriguez has toured much of the world in the last few years. Most recently, she has warmed up concerts for country stalwarts Lucinda Williams and John Prine, as well as headlining the Austin City Limits stage for PBS cameras. Although raised in Austin, Texas, Rodriguez currently hangs her boots in Brooklyn—a place where every niche can find a fan club—landing there by way of the Berklee School of Music, only 200 miles up the interstate, where she honed her fiddling skills and acquired an urban grit that spices up her sultry performances.

Rodriguez’s sound is as indebted to the empowered women of mid-‘90s rock (Alanis, Shirley, Tori) as to any well-coiffed lady of the Opry (Dolly, Loretta, Tammy), with her voice simmering evenly between anger and seduction. At times on her recordings, it is only the instrumentation (pedal steel, fiddle) that can qualify the tracks as “country,” falling more in line with radio-friendly pop balladry, exuding a commercial polish that has dominated the genre since the heyday of Shania Twain.

In a cultural climate where a young country star can convert mass-appeal into massive piles of money, Rodriguez is being presented as a brunette alternative to the Underwoods and Simpsons. Although Rodriguez co-authored every song on her last record, She Ain’t Me, she is still a few albums away from shaking off the calculated presentation of the various promoters and handlers depending on her to finance their summer homes. Her music is good, and her playing exemplary, but everything seems a little too deliberate. When Rodriguez is finally left to her own talents, the result will inevitably be more genuine and engrossing.

In all likelihood, her local appearance will be a straightforward affair. Rodriguez will be performing as a trio with the help of an electric guitar and bass, eliminating many of her atmospherics before zigzagging west of the Colorado River and Europe. Rodriguez can be a forceful fire-breather, anchored by her fiddle and rhythmic stomp; catch her New England-refined, Brooklyn-dwelling, Texas-grown heat before she gets that Pepsi endorsement.
CARRIE RODRIGUEZ WITH ROMANTICA GRAND ANNEX 434 W SIXTH ST SAN PEDRO 90731 GRANDVISION.ORG FRI 7:30PM $15-20

To A Sheen @ The District