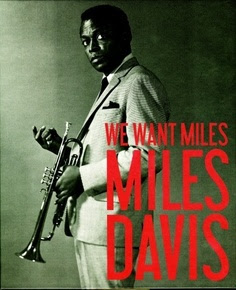 Few would argue that Miles Davis was the most
influential jazz artist of the second half of the 20th
century. His style, both onstage and off, was the
template for countless artists who followed him
whether they plugged in their instruments or
widened their ties. He was at the forefront of each
major change in the genre every time he picked up
his horn. We Want Miles, the book accompanying the
Davis retrospective hosted by Montreal’s Museum
of Fine Arts last year, is an amazing package of
remembrance that includes an unparalleled
collection of photographs and stories that succinctly
sums up the trumpeter’s wild career from the
suburbs of St. Louis to the high-rises of Manhattan.

The intimate photos, of which there are hundreds,
follow Davis from over-sized three-button suits in
the back corner of Eddie Randle’s Rhumboogie
Orchestra to standing outside of his bright yellow,
street-parked Ferrari and employing Andy Warhol
to carry the five-foot train attached to his jacket.
Buried in the images are small details that attest to
the intimacy of these rarely seen images, whether it
is a bottle of Ballantines resting on a studio piano or
a sheet of newspaper separating Davis’ sequined
pants from a grassy British parking lot.

Amid the imagery is a biography gracefully
composed by French journalist Franck Bergerot with
amusing testimonies from Ira Gitler about provoking
Davis into working harder during an early recording
date and Dave Liebman remembering his days
onstage with ‘70s-era Davis, who communicated
almost entirely through sonic hypnosis with his
youthful bandmates. The narrative covers all his
periods from bop to electric and is unbiased about
the importance of each adventurous twist.

20 years to the month after Davis’ passing his
influence has only become stronger. In this one
beautifully designed book, the Montreal Museum of
Fine Arts provides ample evidence for this
lionization. From the biography to the photos to the
color-driven layout, everything is beautifully
presented. This is a great coffee table book for
anyone interested in the image and ego Davis’ music
worked so hard to support.

We Want Miles @ NYC Jazz Record
Hastily posted by Cult of SOC at 10:29 AM